Skip to content
I got a book deal with a major publisher and I’m going to share everything about the process, the mistakes I made, and the things I learned. My book is a non-fiction work, about machine learning. So this might not all apply if you’re working on something different.
To get a non-fiction book deal, you start with a proposal (not a finished b 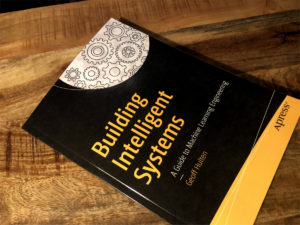 ook, which is common in fiction). And the proposal needs to convince a publisher they might not lose too much money by publishing your book. That’s a bit sarcastic, but in retrospect it’s a good way to think about it. Your proposal is asking a smart business person to bet 10, or 20, or 50 thousand dollars that you’re going to produce content valuable enough so they can recoup their investment and make some money.
So, you have a great idea, something unique to share, a real talent, and a desire to write a book. You’ve probably succeeded at a lot of things in your life, and this writing-a-book thing can’t be much different, can it?
But now you need to write a 5 or 10 page document that a smart person will read and say – I can see this being worth $50,000. In fact, I can see a chance to make some real profit here…so I can pay for all the other books I published that didn’t pay off…
And this is actually pretty hard.
At least it was for me.
Your proposal needs to convince this acquisition editor that:
You don’t need to be awesome at all of these to get a deal (I wasn’t), but you need to look good on most of them…and you can’t be too-obviously terrible at any of them…
The best way to get started on this is to go to a book store, find similar books to the one you want to write, and learn from them. Look at how long they are, how they market themselves, how they are organized. Then make a list of all the publishers who publish them, go to the publishers’ web sites and download their proposal forms – and get started.
Here is an example of a proposal form from a great publisher.

How this worked out for me

I’ll go through these five areas and share some of the challenges I had. I’ll also give examples of steps I took to improve.
The audience – my topic was machine learning, which was very hot at the time (and probably still is as you’re reading this). So that was good. But my book was conceptual, not exactly what everyone else was publishing in the space. So it wasn’t clear who would read it.
My mistake was starting too general and saying that my book would appeal to anyone in software and even many people outside of it, because, hey, who wouldn’t want to read my brilliant book, right?
Ahem…
Eventually I identified some specific personas – an engineer who wants to get into machine learning, a machine learning practitioner who wants to understand more context, a manager or program manager trying to deploy machine learning for their problems – and I wrote a very specific pitch for what each of these will get from the content.
That seemed to work.
Credibility – I’ve been working in the field for fifteen years now at one of the big companies, and I was lucky enough to win a nice award from a scientific publication. This was good. But I did get some feedback that my experience might be too academic (my title was ‘applied researcher’) and, combined with my conceptual approach, might not resonate with the audience.
I tried to address this by adding more practical experience and language to my proposal. I didn’t remove things or hide my experiences – just turned the dial on the ‘researcher’ stuff from a seven to a five.
Platform – I didn’t have one. I had about 200 connections on Linked in and some friends and parents. I didn’t bring many automatic sales with me, so this was a negative that I couldn’t do much about.
Platform is very important, because if you bring just a few thousand automatic sales, you basically totally remove the risk from the publisher. They are guaranteed to break even. Platform is also hard to get. I hadn’t worked on it because I felt it was embarrassing to write lots of blogs and build up social network connections and all that stuff. Not my thing.
But now I’m doing it, and it’s more fun than I thought it would be. I try to blog things that people will learn from, and I’ve gotten some nice feedback, which I really enjoyed. I do wish I’d started earlier.
Oh well.
Writing skills – I’ve been writing (and failing at) fiction for years, so the writing in my sample chapter was safely above the bar for what a technical publisher needs. This wasn’t a problem for me.
Thought through – and here is where I struggled most. I was lucky, because my overall pitch looked good enough that acquisition editors at major publishers took the time to interact with me. Several of them rejected me after we talked, but I learned a lot from them – thanks guys!
And based on these interactions, my proposal evolved a great deal from day one to success. See the table below for some statistics about this evolution.

Each proposal also included a sample chapter that was about 3,000 words which ended up turning into Chapter 1 of the book with little change.
A large part of this progression was me understanding more about what I wanted to write. Another big part of it was me understanding more about what publishers were looking for.
In retrospect, the problem in my early proposals was that I was too vague. I hadn’t created enough detail in my mind and I certainly didn’t have enough on the page. I’d listed topics, but the topic names did not communicate enough to smart non-experts – and my conceptual approach was a bit different, the book didn’t look like what acquisition editors were expecting.

This next section is a bit of a journal of the interactions I had along the way. Maybe this will interest you. Or maybe you just want to skim the summary 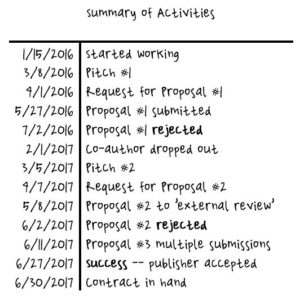 table and move on.
1/15/2016 I had a first draft of the outline and started collecting proposal forms from publishers who might be interested. I was working with a co-author at this time and it was a back-burner project for us so things moved slowly.
3/8/2016 Initial pitch to a big publisher with an O in their name. This was a short email ~500 words with a back-cover-like description and a bit about the authors.
4/1/2016 Heard back from O’s acquisition editor, they asked for a full proposal.
5/27/2016 I sent the completed proposal #1 to O (remember, this was a bit of a back-burner project, which is why it took me two months).
7/1/2016 No response yet, so I asked…
7/2/2016 O’s acquisition editor responded saying they “Can’t quite sink their teeth into it…” They gave some helpful feedback – that the proposal wasn’t specific enough on audience, and the outline was too vague. They offered to let me write some blogs on the topic for their web site to test the concept and let me develop it. I sort of wanted to, but I didn’t end up doing this. We put the project firmly back on the back burner. But I did keep writing chapters on the weekends.
2/1/2017 Sometime in this time period my co-author dropped out of the project. Writing is a lot of work, and he just didn’t have the passion for it – too much else going on. This was sad, but it also allowed me to up the pace.
3/5/2017 Initial pitch to a big publisher with a M in their name. This included an updated proposal (proposal #2), 10 pages, ~1,000 words, 270 named sections and sub-sections. And, reviewing now, this was maybe 60% of the way to the final book’s outline.
4/4/2017 No response yet, so I asked…
4/7/2017 M’s assistant acquisition editor responded asking for a proposal and a phone conversation. I resent proposal.
4/18/2017 Had a conversation with M’s acquisition editor who asked lots of questions – he clearly hadn’t read the proposal (his assistant must have done the screening). He seemed interested. He asked to have till the next week to review the proposal and that we talk again at that point.
5/8/2017 M decided we didn’t actually need to talk and instead carried out an external review of the project based on the proposal and samples I’d sent. This involved sending them to maybe fifteen or twenty potential members of the audience to get feedback.
5/26/2017 Didn’t hear anything back, so I asked…
5/26/2017 M said they didn’t get enough response from their external review. Not really negative feedback, just no feedback. They interpreted as something not resonating with their audience. And asked that we talk again.
6/2/2017 Spoke with M’s acquisition editor again. Got very similar questions to our last conversation. Clearly my outline iteration wasn’t ‘there yet’. This finally sunk into my brain and I decided to fix it for real.
Wrote the final version of the proposal (that ended up working). This one was 30 pages long, 5,334 words, ~300 named sections and subsections, a paragraph of text describing each of the five parts of the book, and text for each chapter that summarized what the reader would learn from each chapter, and what types of questions they would be able to answer after reading the chapter, like this:
After reading this chapter the reader should:
The reader should be able to answer questions like:
6/11/2017 Sent the new proposal to M.
6/11/2017 Sent the new proposal to O, they responded same day saying it was much improved and they would take another look, also asked if I’d be willing to teach some video courses as part of the deal. I said sure…
6/17/2017 I was getting serious about getting on with this book, so I’d decided to send the proposal to a new publisher every week till I ran out of publishers or got a deal… I let everyone know I was talking to multiple publishers at this point and then I sent my proposal to a wonderful publisher named Apress.
6/27/2017 Apress approved the deal and offered me a contract. I contacted M and O, but neither opted to make competing offers.
Here is a link to my successful proposal: Proposal-SUCCESS

I hope this helps you get your book deal faster and easier than I did. You might want to learn about the process of writing the book.
You can also check out the final book here. You can also get an audio book version which is free if you sign up for a trial account with audible.
Post Views: 409